skip to main | skip to sidebar

We were given a huge blessing when Gideon's birthmom said that she wanted us to name him. Ole likes good, strong biblical names and I like unique names, so we were looking for something that fit both. We also wanted something that is easy to pronounce and spell. We settled on Gideon by reading through a concordance. Gideon means, "mighty warrior." As soon as he was born we realized what a perfect fit this was for him, as he needed to fight to breathe and get better. I pray daily for him to grow up and be a mighty warrior for God. I wanted a name that would honor his birth family heritage, and he's from the Kruizenga side of the family...so Kruize it was.

Finding a girl name seemed a bit tougher. Stella ended up being suggested by Ole in the last month or so, and we both decided it fit. She had plenty of other names before we decided (...some people may or may not call her 'Sheniqua'...), but once we picked Stella, that was that. Stella means 'star,' which reminds me of Philippians 2:14-16, "Do everything without complaining or arguing, so that you may become blameless and pure, children of God without fault in a crooked and depraved generation, in which you shine like stars in the universe as you hold out the word of life." Stella is a far more popular/trendy name then I ever imagined giving our daughter, but it's exactly right for her. Pevensie is the last name of the kids in the Chronicles of Narnia, and I've always wanted that as a middle name. I've liked it so much that I considered if for a first name, but I decided it was just a little too confusing.
Posted by Olson Rx at 4:42 PM 3 comments:

This post might be more information than you care to know, but I thought I'd write it down for me and for anyone else who wishes to know.

Let's start with my doctor's appointment on Wednesday the 11th (my due date was the 7th)...

I was only 2 centimeters dilated when the doctor checked me, which was really not very encouraging to me. She did some 'membrane stripping,' which was a quick but painful thing. She told me that it would probably cause contractions that may or may not spur on labor. But my appointment was in the morning and I spent the whole day not feeling a thing. At midnight-ish, I was still awake (due to being nine  months preggo), and I noticed that I started feeling yucky/crampy. I assumed it was due to the stripping and tried to deal with the pain...but I didn't very well. I could NOT sleep at all and didn't want to wake Ole since he had to work in the morning, so at 4:30 am I went downstairs and turned on 'Music and Lyrics.' [side note--I had those songs in my head the whole time I was at the hospital...all I wanna do is find a way back into love...]. I suffered my way through that and when it was over it was about time for Ole to wake up for work. I somehow managed to feed Gideon through the contractions and I tried to put on a brave face for Ole so that he could feel comfortable going to work. But Gideon and I had a terrible morning (I'm not sure who cried more), and I ended up texting Ole and asking him to come home, and he did around noon. We started timing contractions and they were about 5 minutes apart, so I took a shower and Ole did some housekeeping before we finally went to the hospital around 3pm. Walking around and getting to labor and delivery, I started feeling a little better and I was scared that they would send me home (for some reason that was a big worry for me). But they hooked me up and checked me out and admitted me. Gideon was charming the pants off of all the nurses, but my awesome sister came and picked him up around 5pm. THEN came the best part--the epidural! I know that some people are very anti-epidural and I wasn't completely certain of where I stood on the issue...until I got one. Turns out I am PRO-epidural. My pain went from nearly intolerable to completely non-existent. I loved it. They broke my water...continued to monitor...all of this while I just tried to sleep. Around 12:45am I started pushing, and at 2:08 she was born. Even the pushing wasn't SO bad because my epidural hadn't worn off. We cuddled for a little while before they cleaned her up and checked her out. I'm not really sure what Stella was up to the rest of the night, because I finally zonked out.

Life is sure different with her on the outside of the womb. Gideon has been having a tough time adjusting to being an older brother. I think it's starting to get a little better, but I feel so bad for him. I didn't realize just how much it would affect him...but he's still to young to understand why, so sometimes I think he feels abandoned by mommy (although he's still getting plenty of love!). Gideon and I spent so much time together before she was born...we'd sit on the floor and play for as long as he wanted. Now I just can't do that with him all of the time. If I have her in my arms, he'll just stare at us with such a curious little face. I know it's good for him to have a sibling but I never knew how guilty I would feel about not having as much time for him. Plus his sleep pattern has been disturbed due to Stella...it's not a good combination. It's a balance that I need to figure out...I pray I figure it out soon!
Posted by Olson Rx at 3:30 PM 1 comment: 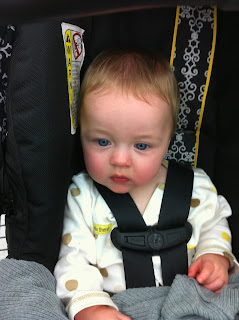 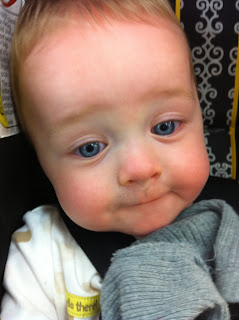 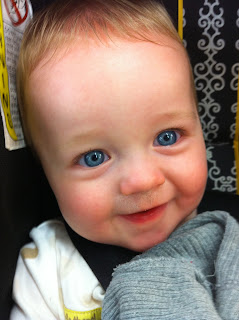 Poor little guy couldn't sleep last night. Did you know that Walmart has greeters at 2 am?
Posted by Olson Rx at 10:00 AM 2 comments:

-Please be in prayer for health our little ones. Ole has had a cold and now I'm seeing signs of sickness in both our babes. Uff da.

-I haven't yet had to handle both of them at the same time by myself, and I'm quite terrified about how to deal with two little ones at once. My first test will be Monday morning. A huge thank you to my parents for being here and helping out. I don't know what I would've done without you!
Posted by Olson Rx at 3:30 PM 1 comment: 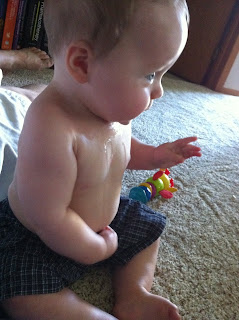 It was warm, but that's drool folks. 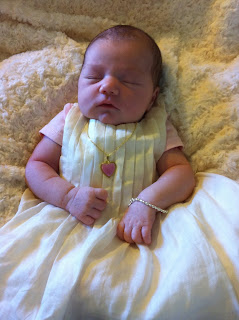 Tasteful jewelry courtesy of the grandparents. 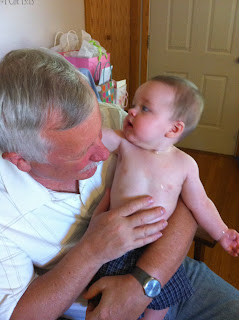 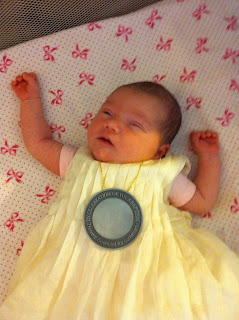 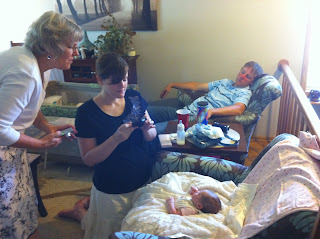 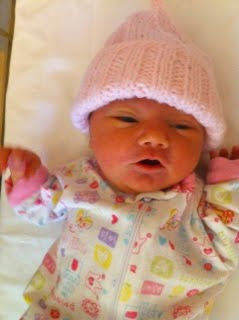 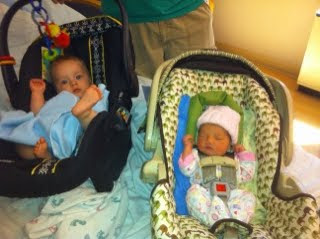 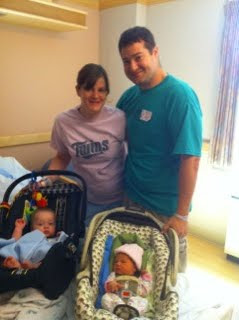 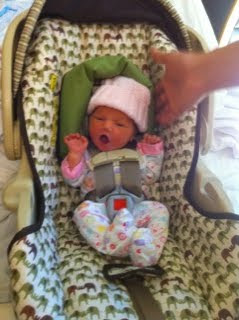 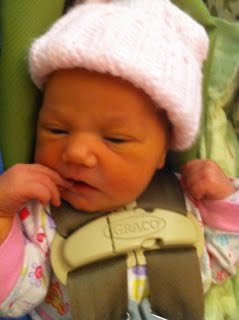 Here are a few pictures from our release from the hospital. Enjoy!
Posted by Olson Rx at 6:32 PM 3 comments: 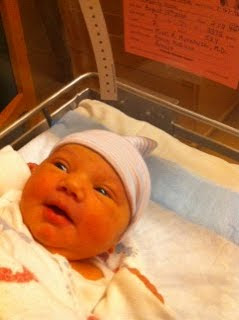 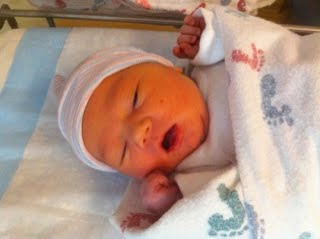 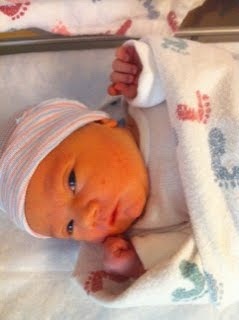 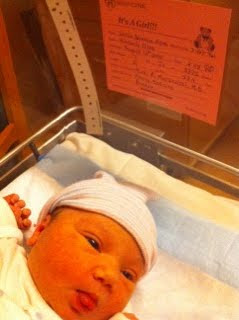 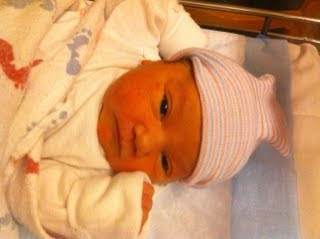 Here are some more pictures of Stella. They're taken with my phone so I apologize for the quality. Gideon got to meet Stella today and we're excited that we'll see him a little more tomorrow. But now it's bedtime!
Posted by Olson Rx at 10:16 PM 3 comments: 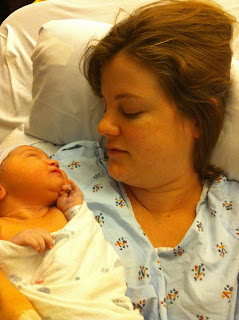 "From the fullness of his grace we have received one blessing after another."
- John 1:16
Posted by Olson Rx at 10:02 AM 5 comments:

I'm ready...
-to be done with being pregnant!
My pregnancy has been fine, but I'm uncomfortable and oh-so-tired, and I'm ready to be done!

-to meet this baby girl!
I can't wait to see her, hold her, kiss her. We have two cribs and a double stroller, I've packed a bag for the hospital, we've named her...I'm sure there are things we're forgetting, but I just want to meet her.

I'm not ready....
-for labor. Uff da. I don't even want to think about it. Also, my body sure doesn't seem to be ready for labor, since nothing is happening. Six days til my due date, and I'd love for her to come today, but she sure does seem comfortable where she's at.


While we wait, I'm trying to enjoy the short time left we have with Gideon as an only child. He seems to be changing every day. He's getting bolder and more curious by the minute. I can't believe how much a child can change in just half a year...and he's not showing any signs of slowing down! I love him to pieces and have a hard time imagining that I could love another child as much as I love him--is that possible? I guess we'll find out soon enough!
Posted by Olson Rx at 1:06 PM 2 comments: